Back to Home
Japanese Site

Aid activities after the 2011 Tohoku Earthquake

Besides sending heartfelt condolences to families who suffered loss owing to the disaster that occurred on March 11, 2011, the Resorttrust Group also started aid activities in the hope of advancing, if only by just one day, recovery in the affected areas.

Resorttrust allocated 1% of hotel sales revenues, amounting to 100 million yen, to an aid fund. To this was added the proceeds of donations made during the Resorttrust Ladies Golf Tournament, and by hotel guests and employees. As a result, we were able to present the Fukushima Prefecture relief fund with a check for 103,526,598 yen.
A further donation totaling 5,000,000 yen ? contributed by guests, employees, and the company itself ? were made to Nishigo Village in the Nishishirakawa District of Fukushima Prefecture. In addition, the Group’s eight golf courses allocated part of their revenue to donate a total of 14,244,913 yen to the Japan Red Cross and to donation drives run by newspapers and other bodies.

Grand XIV Nasu Shirakawa is located in Nishigo (a designated place of evacuation in event of earthquake). As emergency aid to evacuees, it donated drinking water (24,000 bottles) and other daily necessities (such as toilet paper).
Baths in the hotel were made available to people evacuated to Nishigo.

Visits were made to employees residing in administrative areas designated as having received severe damage. Executives were able to meet face to face with more than 2,300 people and appreciate their circumstances. Those people who could not be met owing to clashes of schedule were sent letters inquiring about their situation.

Directors of Resorttrust are members of the Japan Association of Corporate Executives. As such, with the goal of providing aid for retraining and economic activation in the affected areas, they have been making individual and group contributions to an Ippo Ippo Nippon project for local government schools. In October 2011, the donation amounted to 1,000,000 yen. As a mid- to long-term recovery assistance activity, the Ippo Ippo Nippon project is scheduled to run for five years.

In February 20, 2014, the proceeds of a “One-coin Supporter” fund drive, totalling approximately 2.4 million yen, were donated to Aichi Volunteer Center to help with ongoing support for children orphaned in the Tohoku Earthquake.

Bringing the total amount to approximately 87.3 million yen, this was the fifth in an ongoing series of donations to Aichi Volunteer Center.

Donation campaigns
Money was collected from customers and employees via hotel donation boxes. In October to December 2013, part of proceeds from the Tohoku Product Exhibition Caravan were donated, as were part of the proceeds from the 2013 Resort Christmas plan and from charity events held at hotels.

“One-coin Supporter” fund drive
Activities conducted by the Aichi Volunteer Center help with the long-term support of children orphaned by the earthquake. People are recruited to commit to donating 500 yen per month towards support of these children until 2030, when they will have finished high school. Since the largest denomination coin in general circulation is worth 500 yen, donors are known as “One-coin Supporters.” Money is annually received by the end of February and then divided by the number of orphans and remitted for receipt on March 11.

Resorttrust Ladies has featured in the LPGA tour since 1993. As we turn towards the 25th tournament this year, we wish to send our appreciation to all the local people and others involved for their help in making it a success. This year the Resorttrust Ladies was held at Grandee Hamanako Golf Club in Shizuoka Prefecture.
Please click here to see scenes from the tournament 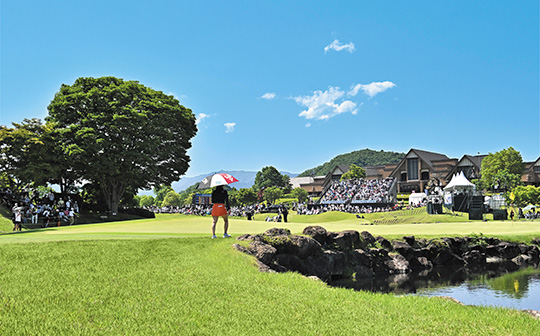 Green campaign
Since the third Resorttrust Ladies, held in 1995, a portion of the ticket sales and other revenues have been donated to promote “Coexistence with beautiful nature.”
The recipient is usually a local group working to improve the natural surroundings. This year, 1,000,000 yen from the tournament proceeds was donated to Public Interest Incorporated Foundation, the Nara Greening Society.

Every year, Resort Christmas at XIV hotels enables many guests to experience romantic moments. During these events, a portion of the proceeds from Resort Christmas Plan sales, along with money collected in donation boxes in the hotels, is contributed to Save the Children, an NGO dedicated to relieving the plight of children in difficult circumstances all over the world.

Employment of persons with disabilities

On January 31 the Resorttrust Tokyo HQ Administrative Support Center (Yoyogi, Shibuya-ku) was favored by a visit from Their Majesties the Emperor and Empress of Japan.
At the Administrative Support Center, persons with disabilities carry out more than 80 types of office work. Their Majesties found out about the working situation at Resorttrust for persons with disabilities. For example, they saw direct mail being prepared and binding being carried out. They gave words of encouragement to individual employees: “You seem to have been doing this work for quite some time?” “You are doing an important job. Keep up the good work.” “Look after yourself.”

In an initiative intended provide case studies for other workplaces by discovering and publicizing best practices, of all the workplaces that submitted information about improvements and innovation in the management and working environment of persons with disabilities, the Administrative Support Center at Resorttrust Tokyo HQ received the FY 2013 highest award from the Ministry of Health, Labor and Welfare as an “Excellent example of workplace improvement for persons with disabilities” (scheme organized by Japan Organization for Employment of the Elderly, Persons with Disabilities and Job Seekers, and supported by Ministry of Health, Labor and Welfare).

As well as it was for actively increasing opportunities for mentally challenged persons to work, the Administrative Support Center was cited for creating work instructions to accompany the introduction of new tasks, and for building an internal support system that kept in close touch with external support agencies, a valuable liaison that helped to increase the motivation and commitment of mentally challenged persons, whose average length of employment exceeded five years.

Resorttrust actively seeks to implement work tasks that are suitable to be carried out by persons with disabilities. In addition to inserting direct-mail materials into envelopes, hotel room cleaning, bed making, and other tasks, we have greatly expanded the scope of work with new office tasks such as converting contract forms to PDF, document creation using high-speed color printers, in-house mail delivery, and shredding documents to protect personal information.
In September 2011, owing to measures implemented for employing persons with disabilities, the Administrative Support Center at our Tokyo HQ was recognized as model workplace and received the FY 2011 highest award from the Ministry of Health, Labor and Welfare as an “Excellent example of workplace improvement for persons with disabilities” (scheme organized by Japan Organization for Employment of the Elderly, Persons with Disabilities and Job Seekers, and supported by Ministry of Health, Labor and Welfare).

For materials created for the training of persons with disabilities working in the company, Resorttrust received the Japan Vocational Ability Development Association Special Award in the “Vocational Training Materials Competition” (sponsors: Ministry of Health, Labor and Welfare; Japan Organization for Employment of the Elderly, Persons with Disabilities and Job Seekers; and Japan Vocational Ability Development Association).
This award was received for materials commissioned via the Tokyo Foundation for Employment Services from the Tokyo Metropolitan Vocational Skills Development Center. These materials, used for vocational training at our Tokyo Administrative Support Center, have been judged to be on a par with those used at the National Rehabilitation Center for Persons with Disabilities, the Tokyo Metropolitan Vocational Skills Development Center, and similar institutions. Following the 2011 receipt of the “Excellent example of workplace improvement for persons with disabilities” award, this was the second consecutive year that the efforts at our Tokyo Administrative Support Center were generously acknowledged with a prestigious award.

Visit Japan Organization for Employment of the Elderly, Persons with Disabilities and Job Seekers (IAI)

Go to Top for Page